Back in 2012 as I’ve launched startupolic.com, I remember that almost nobody was blogging on the Swiss startup scene. Or most were abandoning the effort after a few posts. Fortunately, this has changed! 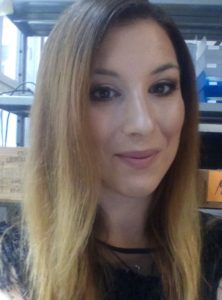 Today I’m pleased to publish a guest post by Tatjana de Kerros-Budkov, who is currently the Startup Builder at Ricolab Innovation Lab (Ricola), Mentor, and 2x entrepreneur- with one exit under her belt- and has helped startups raise over $10M in the last 12 months. Previously, she was an entrepreneurship & innovation Advisor to the Saudi government, collaborated with 500 Startups KSA and roamed the Arabian desert building entrepreneurship & VC tech ecosystems.

Altogether, they’ve raised over $1.4 billion since 2015. They’re growing at an average rate of 21% and employ over 1,900 people. These are Switzerland’s best funded startups.

From Geneva, through to Zurich, I’ve mapped out the 50 of the best funded tech startups across major Swiss cities since 2015. The analysis shows not only which cities have transformed into startup tech hubs and attract the largest VC tickets, but also demonstrates the continued disparities between German and French speaking Switzerland in terms of funding and deal size.

In the midst of a ‘digital revolution’- insights into Switzerland’s most funded startups shows which sectors attract the largest investments, but also which technologies are starting to gain momentum and investor interest. Finally, as the map covers startups that have had their last funding round in the last 24 months- I have analyzed which rounds are most prevalent across regions, and their average value- giving a glimpse towards the direction in which VC, PE and CV is moving in our small innovation nation.

The investment volume among Switzerland’s 50 best funded startups ranges from $233M on the high-end of the funding spectrum for pharmaceuticals startup Novimmune to $2.4M for another pharmaceutical outlier, Memo Therapeutics.

The average amount of funding received among all the mapped-out startups is $28M, with the most prevalent round being series A– making up 38% of all rounds (or 19 rounds in total).

The most prevalent ticket-sizes range from $2M-$5M, and $10.1M- $25M among these startups across Switzerland. What does this tell us?

Firstly, it is important to note that this data will not, by default, include very early-stage seed investments. What the data does conclude however,is that if a Swiss startup that raises $2.5M makes it on the map- the Swiss ticket size of a round is generally quite low in comparison to other countries. Moreover, there are only 6 startups since 2015 that have raised more than $50M- showing a clear dearth in late-stage funding, and putting in question the exit vehicles for investors across the investment lifecycle.

So what is the average value of each round in Switzerland? 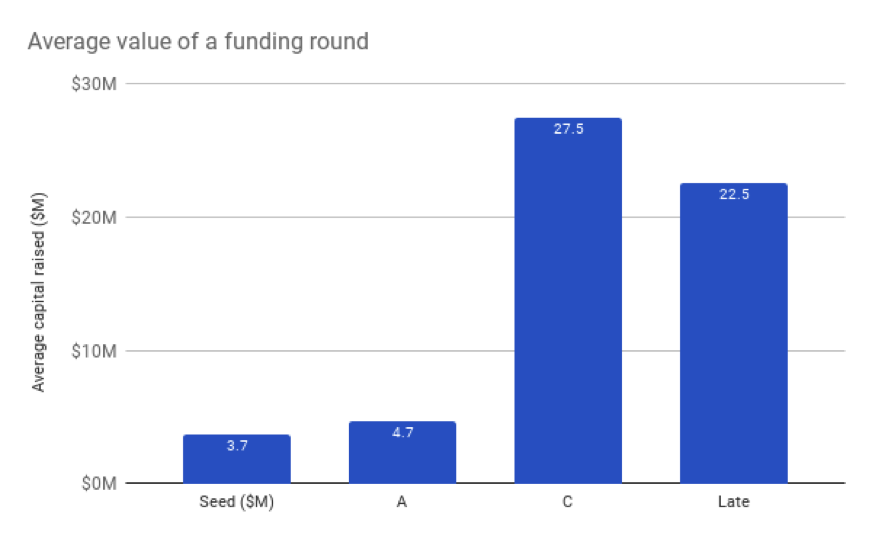 The average seed round raised by a Swiss startup is valued at $3.7M, rising by a mere million to $4.7M for a Series A. This jumps to $27.5M for a Series C, and then drops by a considerable $5M for late-stage capital- averaging $22.5M.

Did you notice a gap in the data?

Indeed- Series B are non-existent. Funding rounds just jump from A to C. Either Swiss startups are wizards at increasing their valuation overnight, or, which seems most likely- there is a gap in the market for follow-on funding- (which I’m personally placing my bets on).

From my knowledge of the Swiss VC ecosystem, the latter option seems to fit right in with current funding patterns. Investors tend to cluster in either the pre-seed and seed rounds, or later-stage funding- which at this stage becomes increasingly concentrated with corporate venturing funds.

Given the current relatively low volume of deal-flow in Switzerland, investors compete on each extreme of the funding spectrum. In the middle, not so much- and investments are riskier. However, this can also translate into a low survival rate for early-stage startups, making the trend of multiple rounds of early-stage capital obsolete and unnecessary in the current market. Either the startups perform sufficiently well to attract much larger players (and be acquired), or they die.

Of course it comes as no surprise.

Among Switzerland’s 50 best-funded startups, 17 are pharmaceuticals and biotech companies (equivalent to 34%). This translates both in terms of the number of investments, as well as the overall dollar-volume- which stands just short of $1 billion ($989.2M to be precise).

But there are some surprises. Agtech startups have definitely been catching investors interest- accounting for 4 startups in our map (the second most popular sector after pharmaceuticals). This includes startups such as EPFL spin-out Gamaya ($3.2M raised) and Zurich-based aquaponics startup Urban Farmer ($5.3M raised). Although agtech startups included in this map have only raised together a total of $16.5M- I have no doubt this is set to increase. 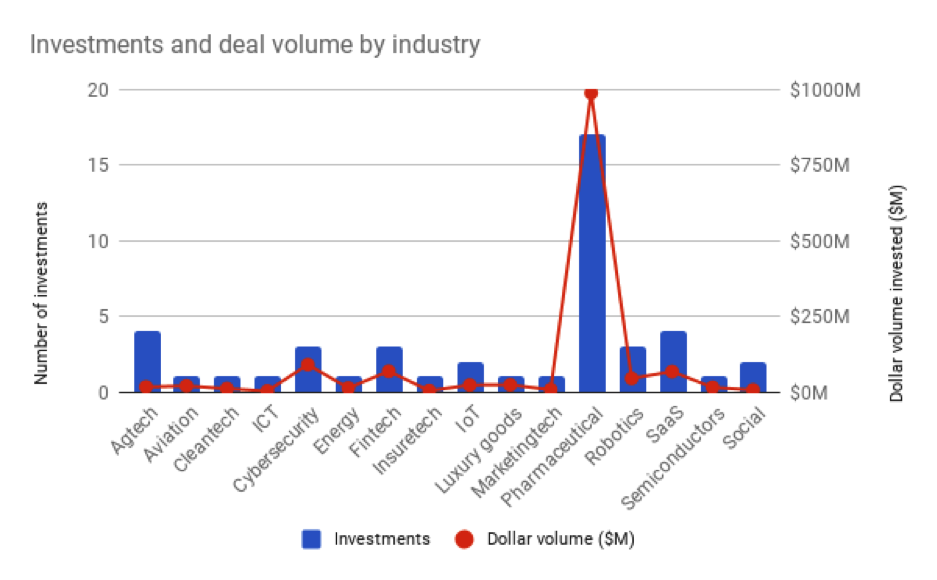 Whilst only 3 cyber-security startups make our map-together – they raised over $90.3M, putting them in second place in terms of dollar volume behind pharmaceuticals startups.

In light of Switzerland’s thriving banking and financial industry, it comes as no surprise that 3 fintech startups make it into the map- raising $68.4M between them – of which $50M (disclosed) was raised by late-stage startup Centralway from the Investment Corporation of Dubai. Fintech is followed closely behind by SaaS startups- who make up $68.4M of investments.

Insurtech, represented by Stonestep, a ‘microinsurance-as-a-service’ startup raised $4M – the only insurtech startup on this map- but a sign that investors may soon want to start betting big in this segment. A similar heat warning can be linked to Scandit – the only marketingtech startup who makes this list- but raised $7.5M.

So which city wins the war for Switzerland’s best startups?

As small as Switzerland is- it is a country divided by language and culture- and as art imitates life, each region vies to attract the best startups, and become the country’s leading tech hub.

It must be Zurich right?

By the number of Zurich-based startups included in our map, yes, Zurich wins, accounting for 17 out of 50 startups – or 34% of Switzerland’s top 50 best-funded startups. Molecular Partners makes it top of the list, having raised a $16.6M Series C with a total investment of $76.6M- followed by Sequana Medical (another Series C pharmaceutical startup that raised $60.4M in total), and of course, fintech outlier Centralway.

Zurich is clearly strengthening it’s grip as the tech capital of Switzerland, and attracting a new breed of startups from IoT through to cleantech.

But Lausanne wins as the city to raise the largest amount of capital.

The Olympic city (in which I grew up in) and home to the world-reknowned EPFL campus comes out top in our map- with 13 startups raising $451.8M between them. In comparison, whilst Zurich startups are better represented, the city’s startups raised only $312.4M in comparison.

Geneva comes third- both in terms of startups represented, as well as investment volume ($288M) – followed by Basel, who saw 5 startups make the rank with a total of $67.2M invested.

Which leads us to question- in which city are you most likely to raise the highest round?

If you’re raising a seed round, you should head to Lausanne, who tops our map with the most seed capital at an average of $10.2M raised, closely followed by St Gallen with $9M.

Series A continues to be firmly dominated by the French-speaking side of Switzerland, with the highest average value of a round to be found again in Lausanne ($11.8M) followed closely by Geneva ($11.3M). Zurich ranks third with an average Series A round raising valued at $9.2M. 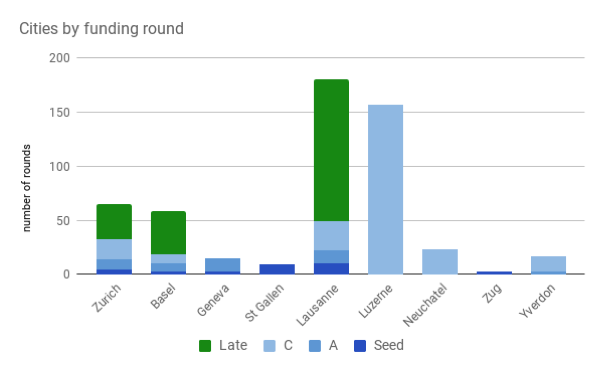 For a Series C, discrepancies between the French and Swiss-Germans remain, with Lausanne topping the map once again at $27.4M, followed by Neuchatel with $23.2M, and then Zurich at $17.8M. It is worthwhile to note however, that Luzerne-based Series C startup CeQur raised a $156.6 mega-round, that would slightly skew the data if included.

And who wins the highest late-stage funding average? Lausanne once again, at $130.5M – followed unsurprisingly by Basel – the global pharmaceuticals hub who saw its best funded late-stage startups raise an average of $39.8M – followed closely by Zurich at $32.6M. These were the only three cities nationally which have seen any late-stage investments since 2015.

What does this map tell us about the future of startup funding in Switzerland?

Unfortunately, and as I previously noted – it highlights continued discrepancies between regions – both in terms of the quality of startups created (in investors eyes) – as well as investor risk-aversion and access to capital. Most startups flock to Switzerland’s most reputed tech hubs in Lausanne and Zurich, or continue to concentrate in areas dominated by the pharmaceuticals industry (Basel). Whilst this shows that local ecosystems are strong, it also highlights that the spillover effect of access to risk capital and innovation will remain regionally constrained- at the detriment of the economic growth and diversification of other cities across Switzerland.

As I also previously highlighted, investors cluster in either seed and very early-stage rounds, or late-stage funding. There is a ‘missing middle’ for risk capital in the VC and corporate venturing industry. Which leads us to question if this may not be the cause for a number of startup deaths in Switzerland, and their failure to scale.

Finally, it is notable to underline that many of the late-stage startups included in this map raised a down-round in their subsequent funding rounds. Whilst I didn’t include this in the data (and this is definitely worth further investigation), this could by symbiotic with a nascent, and risk-adverse investor sentiment- but also the financial performance of startups (for example their difficulties to expand outside the immediate Swiss market), and an exit-market that focuses on acquisitions rather than inflated valuations.

To round-up, if you’re in pharmaceuticals, cybersecurity, fintech and digital services – startups will increasingly find investor appetite to raise capital – and contribute to Switzerland’s transformation into a digital economy.

Oh, and for you who are interested – here is the full table of the 50 best-funded startups in our alpine nation.

View the detailed list of the 50 best-funded Swiss startups

You can also find the complete list of the 50 startups hereafter.