They are  20. They are entrepreneurs. They are building and growing their startup from Switzerland. They are the Venture Leaders 2015!

Each year since 2004, venturelab is organizing a 10-days business development trip in Boston (and New York since 2014) for 20 selected entrepreneurs. I’ve been following the different Swiss Startup National Teams since 2008 and I even had the chance to be a Venture Leader in 2014 (read my report here). These 20 entrepreneurs will have an intensive training at Babson College, as well as meetings with US investors and potential partners. They will get a sense of the US mentality (which is, trust me, really different from the typical Swiss one) and have the opportunity to network at scale!

This year, 2 women made it in the team (last year, we only had one unique female entrepreneur, Bori). I already hear a lot of complaints coming to this fact (I got many excessive feministic blames for Startup Weekend Biel/Bienne, as I had no female jury member – the one, big name I’ve asked, wasn’t available), as there are too few female entrepreneurs in the team. Unfortunately, you cannot expect to have an equal gender distribution in the team. Not that men are more capable. Or better. Not at all. Just because the reality is that you have probably only 10-15% of female tech startup entrepreneurs in Switzerland. And IMHO, selecting women just because they are women wouldn’t be correct and helping them, too. Hope it may change in the future, but I’m confident of it, given the many women entrepreneurs clubs and initiatives (Girls in Tech, Railsgirls, etc.) popping up across Switzerland.

But back to the facts. 20 entrepreneurs. 5 in the biotech field. 5 in ICT (or Computer Sciences, to take the American word). 4 in Medtech. 4 in Electronics/Robotics/Microtechnics and 2 in Engineering.

This year, 12 entrepreneurs come from Zürich (which is confirming it’s #1 place for tech startups in German-speaking Switzerland) and 4 from Lausanne (which is the #1 startup hub in Western Switzerland). But the office/lab location of any of those startups doesn’t really matter, except for politicians. Because Switzerland is one single tech hub (in international comparison)!

Here are the 20 entrepreneurs of the Swiss Startup National team 2015, that you will be able to meet on April 22nd in Lausanne (as well as listening to Nicolas Abelé, which successfully just sold Lemoptix to Intel)! 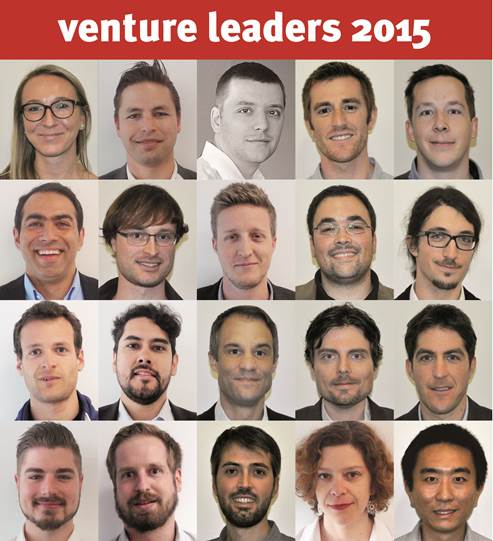